Birthdays, Anniversary, and such... 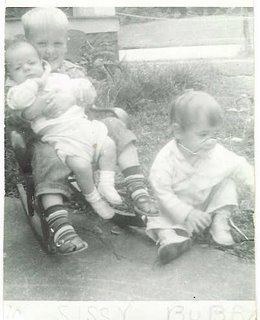 Birthday wishes go out today to my sister, Joan Marie. Seen in the photo above sitting on the ground, and below in the middle. Of course that's me in the rocking chair holding my baby brother Harry "Bubba," and that's him in the picture below on the left. 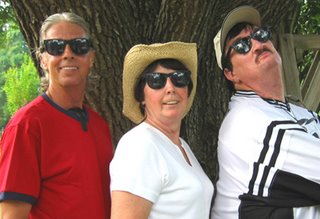 We continue to ask for you prayers for brother "Bubba" today, as he continues his battle with cancer. He's back in the hospital again. 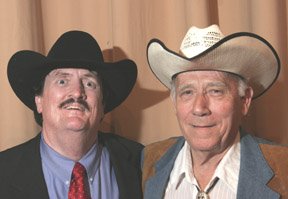 Today is also my dear friend and mentor Cowboy Bob Kelly and his dear wife Chris' 49th wedding anniversary. I think the world of them. Congratulations, we love you guys! The picture was taken at our GULF SOUTH WRESTLING event a couple of weeks ago.

WORLD WRESTLING ENTERTAINMENT is returning to my hometown of Mobile on August 5th, at The Mitchell Center. Tickets go on sale July 8th. I'm sure we will see you there, neighbors!

Chiseled in stone... 2 years ago today 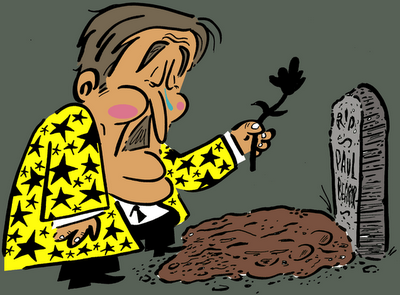 Two years ago on this date the Paul Bearer character was cemented at WORLD WRESTLING ENTERTAINMENT'S first GREAT AMERICAN BASH in Norfolk, VA. The three photos below are not screen captures, they were taken by a friend with a digital camera. 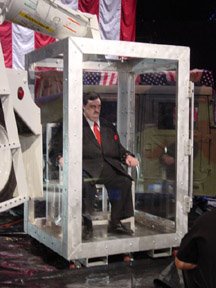 Seriously, I was scared to death. It was a very dangerous stunt. Any malfunction would have not only ended Paul Bearer, but me, myself, and I. In the photo above, I was preparing myself mentally, for what was about to take place. 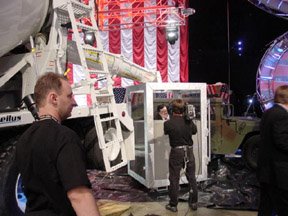 WWE took every precaution just in case something went wrong. Without a doubt, this will always stand out on top of my memories during my 14-year run as Paul Bearer. 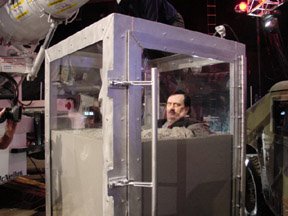 In this picture, the cement starts to rise to up to my "chins." I still get asked more about this event than any other thing I did with The Undertaker. 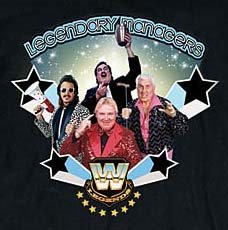 No matter if there may be a return for the Paul Bearer character or not one day, from my heart I can truly say that I have been blessed to see the world over and over again, and to have made so many lifelong friends. Thanks for the memories...
~Percy
www.PercyPringle.com
www.GulfSouthWrestling.com
Posted by Percy Pringle III - Paul Bearer at 11:00 AM 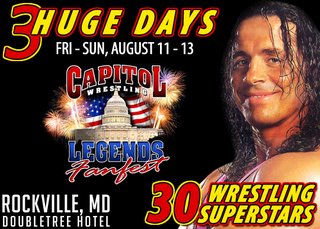 I am pleased to announce that I completed negotiations with CAPITOL WRESTLING LEGENDS FANFEST today, and I will be appearing on Saturday afternoon, August 12, 2006. This spectacular event will take place at The Doubletree Hotel in Rockville, MD just outside of Washington, DC. I hope to see you there! We'll have more news on this as the event draws closer.

WWE honor... and remembering a mentor

It is truly an honor for WORLD WRESTLING ENTERTAIMENT to include me in their newly released "World's Greatest Managers" DVD and T-Shirt. The WWE has always been and remains a very important part of my personal and professional life. For those of you that may be interested there are links below each photo that will take you to descriptions of each. Many emails remark that I have very little to say these days about my years within the company, and I get questions concerning the subject everyday. I guess that my feelings and the bonds that remain are so strong that I hesitate to put them into words. However, I will say that I watch the programming now and then, and still keep in touch. Would I ever return? I've said it over and over again... NEVER say NEVER. 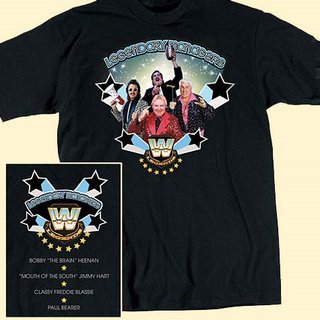 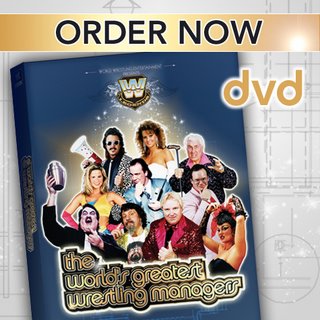 Before I sign off on this Tuesday morning, I must remember my mentor in the funeral industry, Paul E. Pierce Sr. Paul passed away on this date in 2004. A special shout out to Kay, Butch, and Debbie. We will never for get you all! Paul is in my PERSONAL HALL OF FAME if you haven't had a chance to visit those pages before.

Posted by Percy Pringle III - Paul Bearer at 9:56 AM

HAPPY FATHER'S DAY to all the Dads reading this today, especially to my own Father and Son.

BIRTHDAY WISHES go out today to my dear friend and our own Webmaster "Plowboy" Kurt Nielsen!

HAVE A GREAT DAY MY FRIENDS.
~Percy
www.PercyPringle.com
Posted by Percy Pringle III - Paul Bearer at 9:54 AM 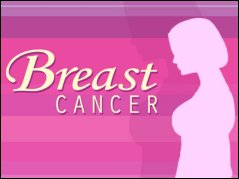 Four years ago today in 2004, my wife Dianna begin radiation treatments for breast cancer. Through her surgery, chemotherapy, and radiation we felt totally helpless. Even if I had one, I wouldn't wish this on my worst enemy. PLEASE guys make sure the special ladies in your lives do what they are supposed to do to catch this dreadful disease early on. It can be cured. Dianna is cancer free today! Praise The Good Lord.

Cancer is a horrible beast. We just lost "Eathquake" John Tenta at the age of only 42. Notwithstanding the fight my brother "Bubba" continues to fight this very day. 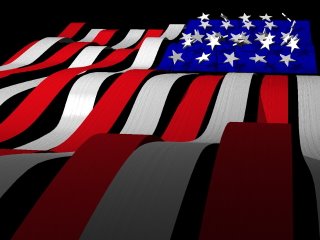 Today is Flag Day. Let us stand up for 'ol glory! 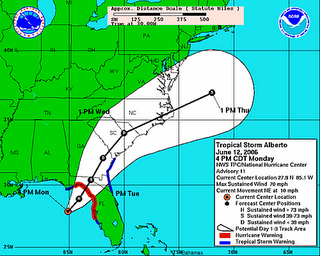 It's Monday my friends, and the Florida Gulf Coast is preparing for the first storm of the season. Fortunately Alberto doesn't look too bad, but you never know Mother Nature. Our weather along my part of the Gulf of Mexico has been nothing but hot and extremely dry. My front yard looks like the Sahara Desert. We need rain badly, but we've learned to be careful for what we wish for.

My Gulf South Wrestling group enjoyed another great event last night. It was good to see my 'ol friend Brian "Road Dogg" James, his Dad "Bullet Bob," and brother Scott as well. We certainly appreciate all of the support! 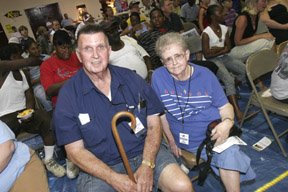 Today is my Mom and Dad's 53rd wedding anniversary. We certainly send our love and wish them 153 more! They were sitting on the front row (photo above) at our Gulf South Wrestling event this past Saturday. It's not a secret that it's all their fault that I got hooked on pro wrestling about the time I started walking. They remain my biggest fans to this very day. That's OK... because I am their biggest fans too!

One year ago today I signed my WWE "Legend's Contract."

A big shout out to everybody attending The Cauliflower Alley Club banquet and Reunion in Las Vegas! Ya'll have fun and stay safe. Remember you can tell me what happens in Vegas, I can keep secrets. LOL 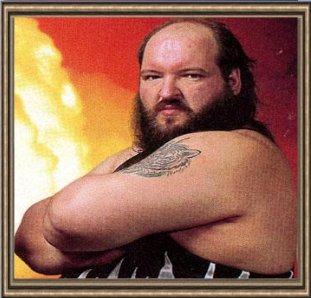 John Tenta known in the pro wrestling world as "Earthquake" passed away today after a valiant battle with cancer. John was a fantastic husband, father, and friend. John and I communicated several times during the past few months. He was very much aware of his prognosis, and was rightfully concerned with getting his final arrangements in order. Considering my experience in the funeral industry, and as his friend, I did my best to answer his questions to the best of my ability.

In our last email he wrote, "Percy... gosh it still doesn't feel right calling you Percy because I've only known you as Paul Bearer. I will never regret being a part of professional wrestling. I've met some great friends, which you are one. I'm not even scared of leaving this world. I just worry for my family. Keep them in your prayers."

That I will, John. Go rest high on that mountain, your work on earth is done.
Rest In Peace, my friend.
~Percy
www.PercyPringle.com
Posted by Percy Pringle III - Paul Bearer at 11:45 AM

"Percy, are you going to the CAC?" 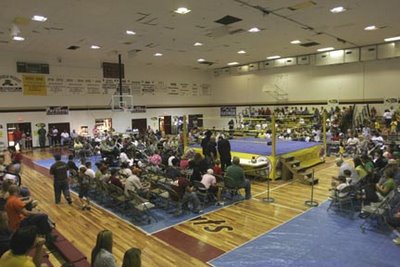 "Percy, are you going to the CAC?"
I appreciate all of the emails my friends, but unfortunately, no I am not going this year. I will miss all of the activities in Las Vegas, but thank The Good Lord I have a lot of stuff going on here to keep me right at home. The photo above was taken at one of my GULF SOUTH WRESTLING events this past Saturday. I have another booked for this weekend. I have really been diving into the "Percy The Promoter" thing. Be careful what you wish for... LOL

I hope you all are well, and I continue to thank you all for your support and friendship. 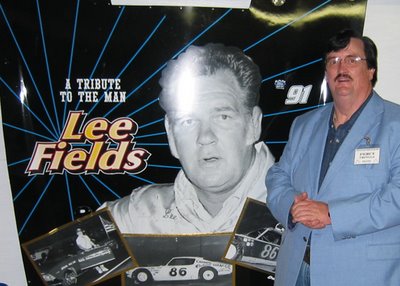 "The Godfather" of Gulf Coast Professional Wrestling Lee Fields, passed away on this date in 2000. In the photo above, I am posing with a memorial engine cover at our Gulf Coast Wrestlers Reunion this past March. Lee also owned The Mobile International Speedway. What a class act, a true legend and mentor. We'll always remember...
www.PercyPringle.com
Posted by Percy Pringle III - Paul Bearer at 11:04 AM

Many of you that are not familiar with our GULF SOUTH WRESTLING organization wonder what I have been doing with my time. Well... here's the answer. It's Percy "The Promoter" these days. If you live in our area, this is one you can't afford to miss!

www.PercyPringle.com
Posted by Percy Pringle III - Paul Bearer at 9:25 AM