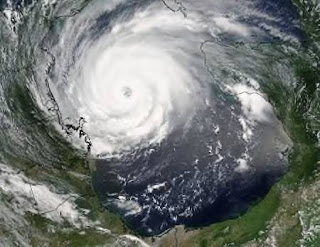 As a resident of the Gulf Coast, today we mark the anniversary in 2005 of Hurricane Katrina. There is no doubt that you all have seen the video and photographs of this unwanted visitor to our beautiful area. On that awful day many of my neighbors had their world destroyed; their homes, the artifacts of time and family and so many of their treasures were lost. But that day did not claim their spirit which has shone like a lighthouse beacon for all to see.

From New Orleans right here to my doorstep in Mobile, Katrina's visit can still be seen and felt. I have never and will never complain about the inconveniences that day gifted my family; as just down the road many lost it all including their lives. We southern coastal folks force a smile and try to shrug it off as these anniversaries come along each year. Those of us that have lived here most of our lives can recall the other nasty visitors we have endured, and can only stay prepared for the unknown date and time that there will be another. The price we must pay to live in "God's Country."

Be Blessed.
~Percy
www.PercyPringle.com
Posted by Percy Pringle III - Paul Bearer at 7:35 AM 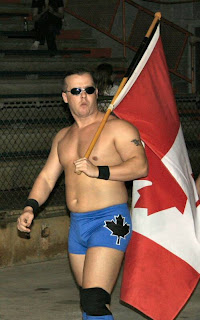 Big HAPPY BIRTHDAY wishes go out to our dear friend Aeon "Purty Lipps" Flexx today! That's "Lipps" above with The Canadian flag, and below between yours truly and "Cousin" Marcel Pringle. 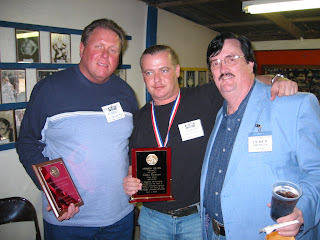 Posted by Percy Pringle III - Paul Bearer at 6:17 AM

On this date in 2005, myself along with three friends formed GULF SOUTH WRESTLING Inc. We ran in the neighborhood of 20 very successful events in a year and a half. However, due to the nature of the beast and circumstances beyond our control, we closed GSW on May 16, 2007.

Enjoy the interesting EARTH CLOCK below, the numbers are facinating to me.


Be Blessed
~Percy
http://www.percypringle.com/
Posted by Percy Pringle III - Paul Bearer at 8:24 AM 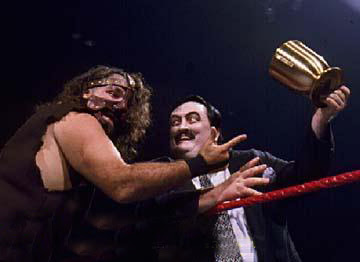 On this date eleven years ago, in 1996, at The Gund Arena in Cleveland, Ohio; it was the memorable BOILER ROOM BRAWL with The Undertaker versus Mankind. That evening I turned on 'Taker giving Mankind the victory.

An interesting bit of trivia from that match was that we pre-taped the actual brawl in the boiler room the night before in an empty Gund Arena. When the PPV aired live, only the entrance into the boiler room and the exit as they fought towards and into the ring were live. The fight in the room was actually edited into the live event.

Below courtesy of YouTube is the event in three parts.


Have a great weekend!
Be Blessed.
~Percy
http://www.percypringle.com/

Posted by Percy Pringle III - Paul Bearer at 9:00 AM

I'm glad I didn't know the way it all would end... 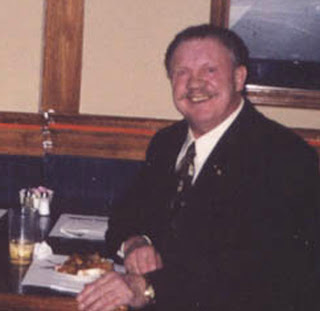 I remember January 16, 1985 vividly. It was my first day working with Championship Wrestling From Florida, and my first encounter with Dewey Robertson, "The Missing Link." To say that Dewey is one of the most unique individuals that I have experienced in my 30-plus years in sports entertainment is definitely an understatement. The lessons I learned as his manager while traveling countless miles around the country in one of his old classic green Cadillacs will never be forgotten.
I was honored when Dewey asked me to write the forward to his autobiography. He sent me an advance manuscript to read, and asked for my suggestions. I made several notes as I read, and realized that it wasn't my place to make any changes to my friend's life story. This is a Byron Robertson chronicle. I tossed my notes into the trash, and returned the book exactly as it was sent to me. However, I must say that I secretly kept something from the package that I addressed to Hamilton, Ontario. I retained a renewed respect for the man known as The Missing Link.
BANG YOUR HEAD is as unique as Dewey himself. These chapters document his battles in and out of the professional wrestling ring, and the defeat of the many demons he befriended along the way. His determination and persistance to keep moving forward exemplifies his heart and soul.
Faith, family, and friends are what this personal story is all about. I am so proud to have crossed life's pathways with the author. I am no doubt a better man, and I believe you will walk away from this reading with the exact same sentiments.
Now...turn the page and experience Dewey - The Missing Link.

Taken from the forward that I wrote for Dewey's autobiography BANG YOUR HEAD - The Real Story Of The Missing Link. 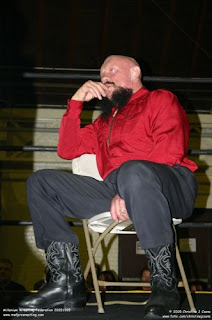 Myself and the world of pro wrestling have lost three friends during the past 6 days. Bronko Lubich, Bryan "Crush" Adams, and Dewey. In a world where wrestling deaths have been making the news headlines, and the hallowed halls of our nation's capital as well; it wasn't the demons of Dewey's past that took him from us. It was the beast - CANCER. "Dew" pinned his other demons to the mat, but from that dreaded disease he couldn't kick out. 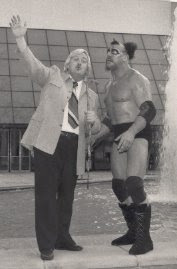 I have so many fond memories of my years of friendship with The Link.

There was the time while working Florida we were driving up Highway A1A, along the Atlantic coast. We were headed from Miami to Daytona Beach, and had plenty of time. Dewey's ex-wife Gail, who served as his valet under her ringname "Sheena", was our chauffer as we tooled around in his big classic green caddy; smoke pouring out of the windows (shades of Cheech and Chong). Gail suggested that we pull alongside the beach so she could stretch her legs and get a bit of sun. As we rested alongside the seawall, we got the usual looks that a trio like us would get (see the photo below). I didn't pay too much attention to it, as I was used to the every day thing. After about 30 or 40 minutes, it dawned upon me that there were no bikinis running around. I asked Gail if she thought something was funny here. After a few seconds checking out our surroundings she said... (now bless her heart, she stuttered a bit sometimes)... "PPPPPPercy... I tthink tthis isisis a gggga ga ga gay beach!"

Well, she was right on the money! There we were surrounded by well... I think you get the picture. Ahhhh... I guess you had to be there. 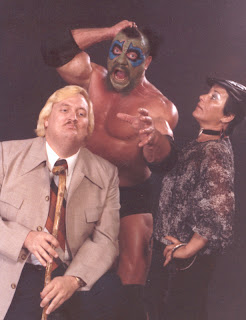 Then there was the visits to the nudist camp. Yes, Dewey was a nudist, and naturally they lived in a nudist park. Lord, where do I begin. What an experience for this Alabama country boy! The first time that Rick Rude and myself were invited to a Bar-B-Q there will never be forgotten. Nope... I'm not going to tell that one. LOL Forget it, sorry, use your imaginations. I will tell you I didn't take my drawers off, and "Simply Ravishing" Rick Rude didn't either. 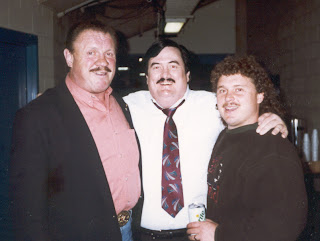 Dewey was a good man, and a good friend. He loved his family, his Lord, and sports entertainment. He was sick for longer than most of us knew, and if there is any comfort in any of this, he isn't in pain anymore. I probably can't say that for the rest of the boys standing around the pearly gates when he walked in this morning. Poor 'ol Bronko Lubich has only been there for 4 days, and here comes Dewey asking him for a loan, just like he used to back in the World Class days. LOL 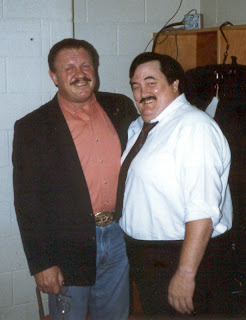 My friend Dewey died this morning... 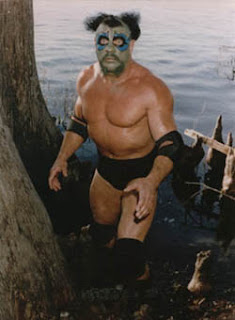 My long time friend, "The Missing Link," Byron "Dewey" Robertson passed away 3:30 am this morning in his native Hamilton, Ontario Canada following a bout with cancer. I will share some pictures, thoughts and memories of Dewey later today or tomorrow.

Be Blessed.
~Percy
www.PercyPringle.com
Posted by Percy Pringle III - Paul Bearer at 9:25 AM 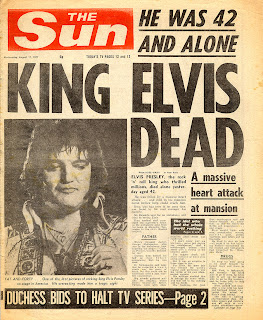 Posted by Percy Pringle III - Paul Bearer at 6:43 AM 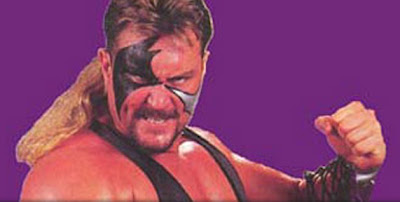 Bryan "Crush" Adams passed away today at his residence. Bryan was a dear friend of The Undertaker, in fact he was his best man during his wedding to Sara. He traveled with us quite a bit back in the day, and I fondly nicknamed him "Pineapple" because of his Hawaiian heritage. He was a gentleman in every sense of the word, and will certainly be missed. 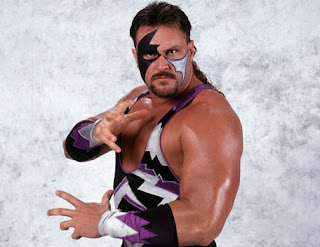 REST IN PEACE MY PINEAPPLE FRIEND! 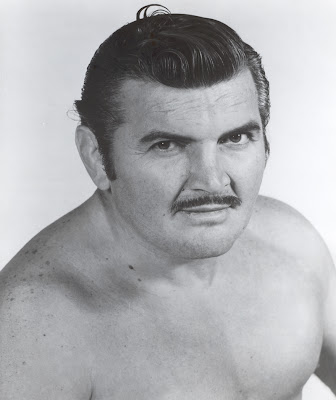 Today I mark the passing of another ring legend that I am proud to call my friend. Sandor Lupsity, a.k.a. Bronko Lubich died in Dallas, Texas yesterday. Many of you only remember Bronko from seeing him referee with The Von Erich's World Class Wrestling out of Dallas. However, Bronko was involved in our industry for many years also as a wrestler, manager, and member of the WCCW office staff.

I learned so much from Bronko during my six-years in Dallas, and he was so proud of me when I went to WWF/WWE. We have exchanged Christmas cards every year for the past 16-years.

He is now at peace with his dear wife Ella; and I wish his daughters my love and sympathy.

Go rest high on the mountain my friend, you work on earth is done! 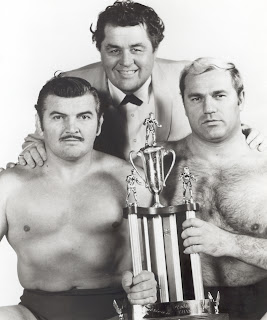 Bronko with Chris Markoff and their manager George Harris. 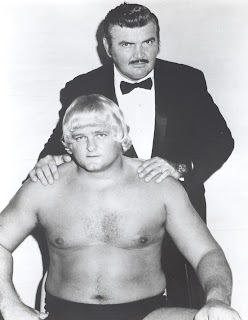 "Bronk" with a young Bobby Duncum.
I have also learned that my longtime friend Dewey Robertson "The Missing Link" is now hospitalized in his hometown in Canada battling the final stages of cancer. Please keep him in your prayers.
Be Blessed.
~Percy
www.PercyPringle.com

PP3 at the second Holyfield-Tyson Fight ???

Can anybody spot yours truly in the artwork of the brawl that ensued after the second Evander Holyfield-Mike Tyson fight that ended in Tyson’s disqualification? If you have a problem, click on the photo and it will enlarge.

Thanks to faithful PP.com supporter Mark Rabinowitz for bringing this piece of artwork to my attention. You may find the original at: http://www.nomas-nyc.com/ 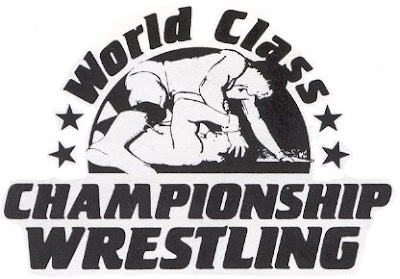 On this date in 1989, Eric Embry and myself tore down the WCCW banner from the walls of the world famous Sportatorium in Dallas. Here's the angle on YouTube: 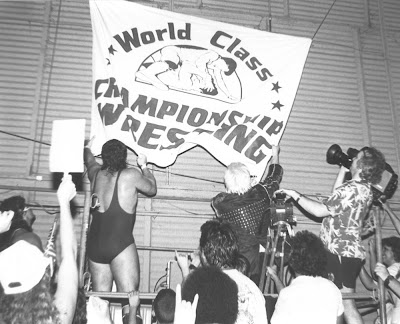 You've heard me say many times before that this night was one of the most emotional nights of my career. That it was...
Have a great weekend!
Be Blessed.
~Percy
www.PercyPringle.com