I certainly enjoyed being part of a live WWE RAW television event this week, after a long period.  If you have been following the show you know that the week before my "son" Kane attacked the Legendary Cowboy Bob Orton, Father of ring star Randy Orton.  It was only natural for Paul Bearer to pop back in, and Randy Orton getting retribution on "The Fat Man".  I throughly enjoy these storylines, notwithstanding my month long "kidnapped story" with Edge just last year.

I had a blast being with my extended WWE Family again, even though I worked with them the entire WM-XXVIII extravaganza just last month.  You must remember that I signed my first contract with the then WWF, on December 22, 1990; and started managing The Undertaker in January 1991.  I have remained a part of the company, on and off television, since that time.  Count the years....

Even though I am not on WWE television programming these days, I am signed to a "Legends Contract", that still has over 4-years remaining.  Currently I am allowed to do independent wrestling appearances around the globe, and answer The WWE calls now and then.

No matter if the Paul Bearer character has been buried in cement, pushed off a balcony, or locked in a freezer; the "Father Of Destruction" is very much alive.  WWE doesn't kill anybody on their television shows, even though it might appear that way, as a cement burial, fall from a balcony, or spending time in a freezer may very well indeed put an end to a real life.  Storylinewise, The Paul Bearer character is being treated for hypothermia following this week's freezer incident.

My appearance this past week on RAW was a last minute creative idea of the company.  I had been in Las Vegas most of last week with The Annual Cauliflower Alley Reunion, and didn't receive the request for my ONE TIME return to RAW until Saturday morning.  Of course I jumped at the chance, no matter what the plans were.  It was a win-win situation for me.  Will you ever see Paul Bearer on WWE programming again?  Never say never... but, I wouldn't hold my breath if I were you.  My ship has virtually sailed.

I have absolutely no intention of returning to The WWE, or any wrestling company for that matter, in any type of full time position.  I will continue to work with independent promotions, wrestling conventions, reunions, etc., as I have been doing during the past few years.
For all the comedians on my Twitter account, continue to have your fun, but enough is enough, and don't be surprised if I begin using my BLOCKED button, very soon.  I respect my fans and supporters, but when you cross the line, you're walking on the fighting side of me.
Thank you all for your continued support.  I am truly blessed to have lived my boyhood dreams for 35-years.  I just wanted to clear up a few matters here, and I sincerely appreciate your time.

I have been a lifetime member of The Cauliflower Alley Club for many years.  In fact, I was honored by them in 2003.  Unfortunately for many reasons, one of which was the final cancer stages and death of my wife Dianna, I have not attended in at least 6-7 years. 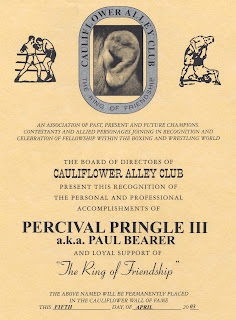 Well, this year the annual reunion was held on April 17th and 18th, in Las Vegas.  "The fatman" was back in all my glory, and I had a blast.  A number of photos were taken with my own camera, those below are just a few I would like to share with you.  The only one the wasn't taken with my personal camera is the last one, and you can see who the photographer was for that one yourselves. 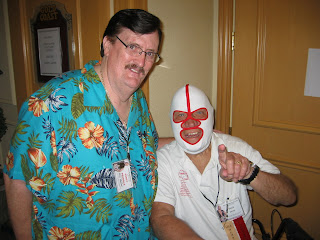 With "The Destroyer" Dick Beyer 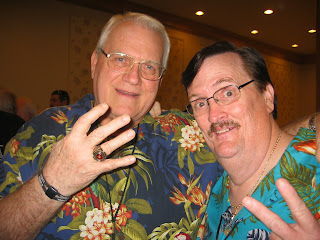 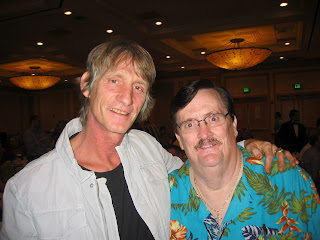 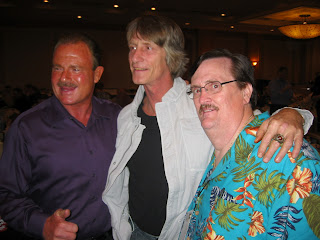 With B. Brian Blair and Kevin Von Erich 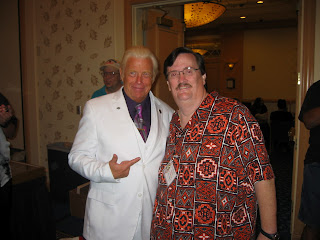 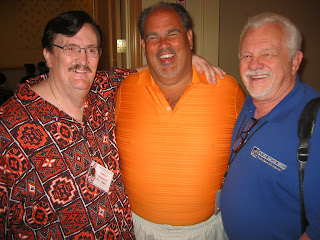 With Ed Moretti and Les Thatcher 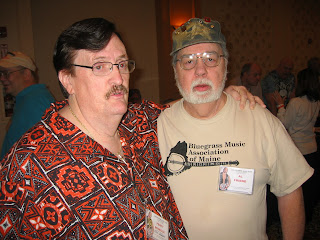 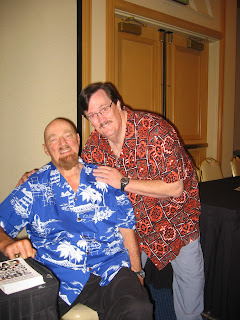 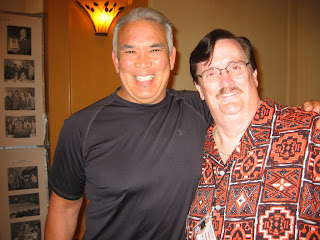 With Ricky "The Dragon" Steamboat 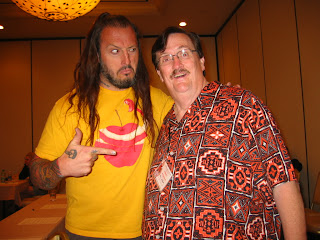 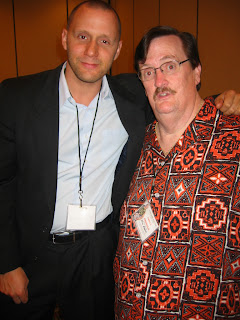 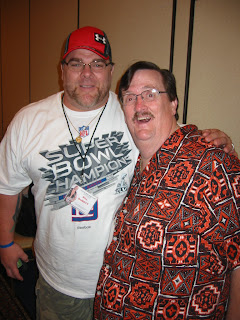 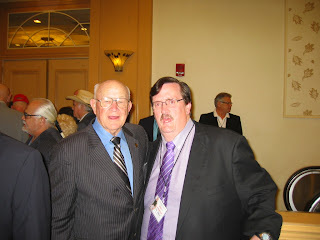 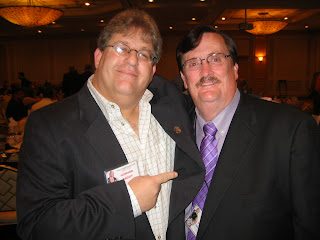 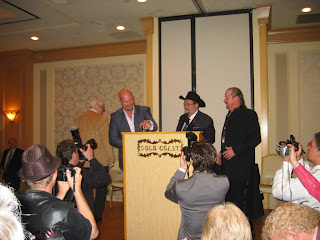 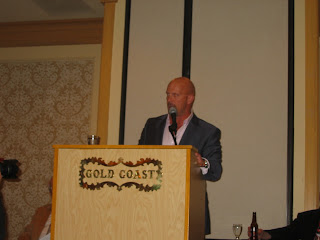 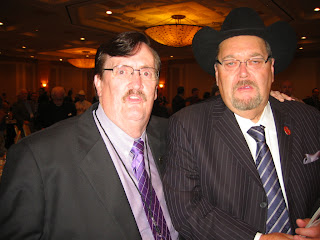 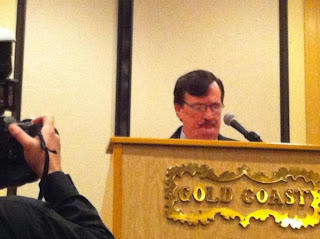 This photo was taken by my long time friend
Stone Cold Steve Austin with his smart phone.
I was presenting Bill Demott with the
2012 CAC Men's Wrester Award.

Needless to say, I had a fantastic time visiting with so many friends that I don't get to see very often, notwithstanding so many new young ring talents and wrestling fans.  I will certainly do my best to make it back next year, in 2013.  Why don't you consider making the trip yourselves?  It will be an experience you will never forget. 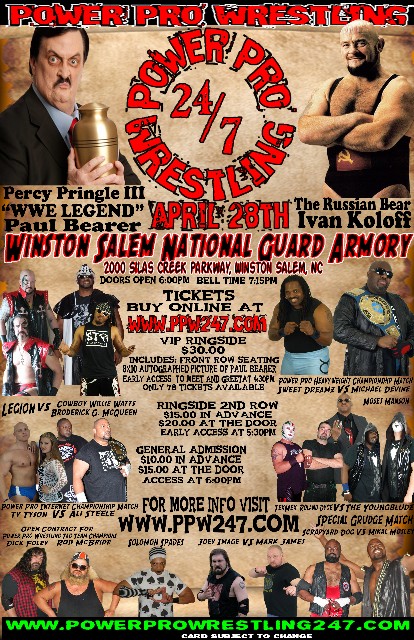 Percy returns to Winston Salem, NC for his first time in many years, making his debut with POWER PRO WRESTLING 24/7 on April 28, 2012, Belltime 7:15pm.  If you live in the area, this is one you cannot afford to miss!

I am a Lifetime Member of The CAC and 2003 Honoree, and I will be returning to Las Vegas this year for the first time in several years.  I sure hope to see you there! 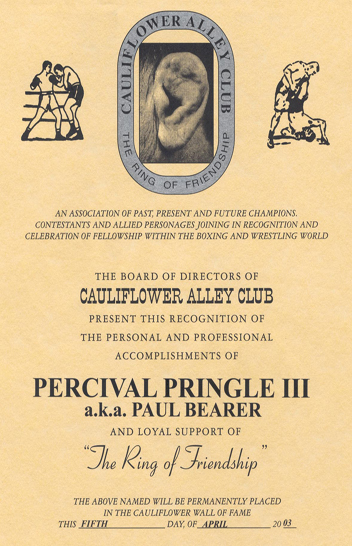