My friend Sherri and more... 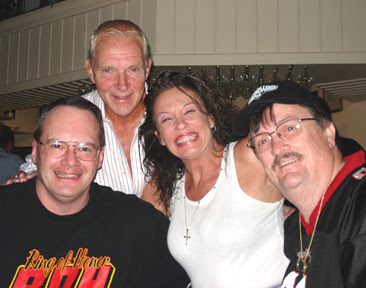 Jim Cornette, Bobby Heenan, Sherri Martel and yours truly enjoying our friendship in the hotel bar after the first night at The Capitol Legends Convention last year In Washington D.C. 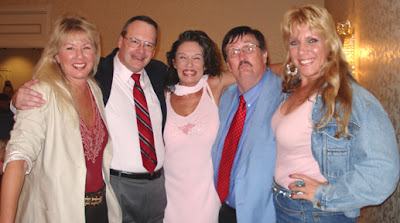 Robin Smith (Rockin' Robin), Jimmy Cornette, Sherri Martel, myself and "Baby Doll" in a photo taken during the Legend's Convention. 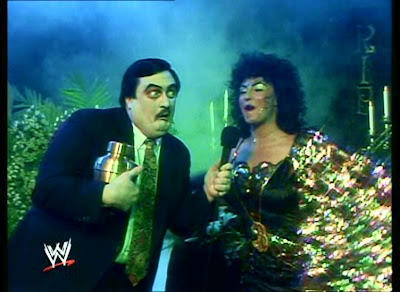 Sherri and myself working and having fun during one of my 'Funeral Parlor' segments during the early 1990s.
Sometimes words seem to fail me. This is one of those times. I wish I could express what a special bond exists between us managers/friends in the top photographs. To say it is a brother/sister relationship would be an understatement. I think our eyes and our smiles tell the story in a way that my words could never do.
I met Sherri several times early on in her career, however we never really got to know each other until I began in The WWF in January of 1991. The memories of that night when we truly bonded will stay with me forever.
We were taping TV in Fresno, California and were staying in San Francisco. I had made the trip with 'Taker and another wrestler, but following the show discovered that Sherri was driving back to San Francisco alone. She saw that we had 3 in our car and asked of I wanted to ride with her to keep her awake.
Staying awake wasn't a problem, as we talked, laughed, and told stories the entire trip. It was that night I got to know Sherri Russell for the true class act and fine woman/mother/wife and daughter that she was. I had the opportunity to know Sherri's family, and can remember when her son was virtually a toddler. I also knew her mother, who was without a doubt a queen in her own right.
Sherri never met a stranger. When she smiled, she brightened the world around her. She treated a fan on the street like she had known them all of her life. What a darling she was, and I will always treasure our friendship.
Looking back at the photographs above again, only makes me think of those involved in our industry today. I only wish they could feel what we felt. I may be climbing on my proverbial soapbox here, but I know for a fact Sister Sherri would appreciate my words and approve of them completely.
Our business has changed so much through the years. Few young talents today share the bond that Jim Cornette, Bobby Heenan, Sherri, myself and others enjoy. Our sport has a way of destroying friendships, not building them. Kids today do not have the opportunity to make the road trips like we did when we were refining our profession. They are not presented with the situations that allow them to grow, not only in a professional way, but personally.
If anything burns my ass these days, it's those 160+ pound kids, with little legit training, that don't even own a pair of boots or wrestling tights, that are in the ring prostituting themselves for self-proclaimed indy promoters FOR FREE.
Sure I can understand the desire to be a pro wrestler, as I shared the same dream so many years ago. I know that it is not the young wrestler's fault too. I place the blame directly on the promoters, few who have a clue what they are doing, draining the local fans for everything they can get out of them. The promoters should know better, some do, and screw the kids anyway, but many are totally ignorant to how a pro wrestling event should be run. The promoters are the ones who actually prostitute the young talent. They know how much the kids want to wrestle, and will have them drive for hours, set up their ring and not even offer then a hamburger muchless gas money. It is a damn crying shame, taking advantage of the unknowing just to pad their pocketbooks.
I worked an indy show just a few weeks ago. I was there on a fairly good payday considering the short drive, and enjoyed myself throughly. But... when pay time came, I noticed that I was the only one that got paid. I'm certainly not bragging, but I divided my pay among the kids who gave up their cash for me to be there. If the truth was known, they weren't going to get paid in the first place. But that doesn't matter, as I believe they will always remember the lesson I taught them that evening.
I could go on and on, but I will stop here. As I always say, no words are necessary for those that understand. For those that don't get it, not enough words will ever allow their comprehension.
To close on this Saturday morning, I am happy to say that P3 PROMOTIONS is negotiating several events right now along the Gulf Coast. We will have more news for you as they develop. You know me, I never move quick and play our game like playing chess, carefully making each and every move. Have a great weekend, I am off to the Funeral Parlor.
Take care, and be blessed!
~Percy
www.PercyPringle.com

Posted by Percy Pringle III - Paul Bearer at 8:01 AM